Incompatible Changes: Some error messages stored in receipts/traces are changed. This will affect the return message format of some RPCs. Please read this for details: Conflux-Chain/CIPs#70

The new version of the node program can be downloaded in github.com/Conflux-Chain/conflux-rust/releases. 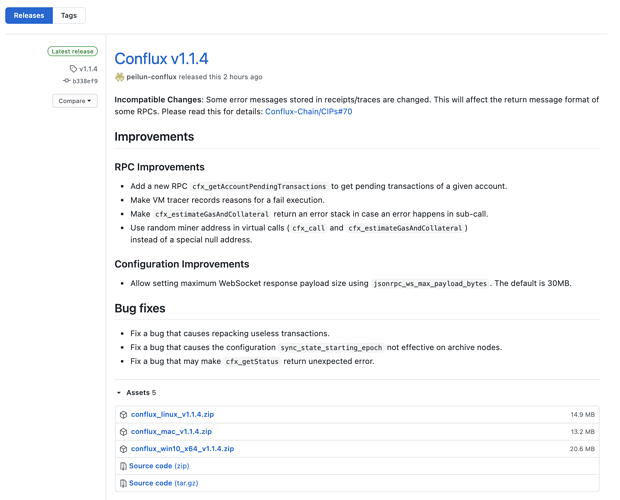 I am a node operator/miner, what do I need to do?

If you have started the node, you need to suspend the operation of the node first, and then replace the executable file named “conflux” in the run directory of the original node program with the Conflux executable file of the Conflux v1.1.4 node program. It can be restarted later.
If you start a new node, you can download the latest version of Conflux v1.1.4 and run it.

What will happen if I do not upgrade the nodes or refuse to upgrade?

Under normal circumstances, there will be no problems. This upgrade does not involve the content of the consensus layer, it is your choice to upgrade or not.

What impact will it have on ordinary users?

During the upgrade process of nodes running on the chain, some services may be affected and delayed. After the node upgrade is completed, it will return to normal.

Thanks to our community for your support!

A sincere thank you to the Conflux community and all the developers in the Conflux ecosystem. Thank you for your hard work, thoughts, and contributions. To a better future!