Transactions go through the following stages from construction to confirmation. 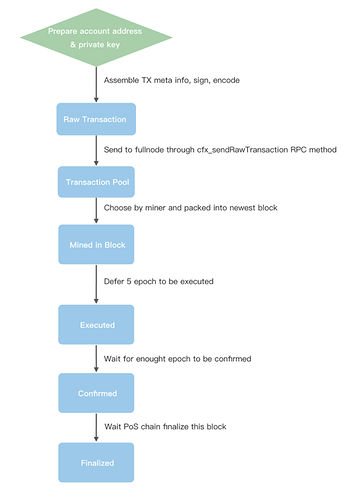 Detailed Explanation of the Transaction Stages

All transactions sent need to be signed with a private key in order to be accepted and successfully executed by the blockchain. Therefore, before sending a transaction, you need to prepare the private key of the sender, which can be used to derive the address of the account.

In addition, a certain CFX fee is required to send a transaction, so the sender’s account needs to have some CFX in order to send the transaction successfully. The CFX of the testnet can be obtained through the faucet.

There is one situation in the Conflux network that does not require the sender to pay the transaction fee.

To learn more details about Conflux sponsorship, you can refer to the introduction of the SponsorWhitelistControl in the built-in contract.

If you want to know the meaning of each keyword of the transaction and how to specify it, please refer to Conflux Transaction Explanation

After the meta-information is prepared, they need to be encoded in a fixed order by RLP encoding and generate the hash. Then the transaction signature is obtained from the secp256k1 signing operation by using the private key.

Finally, the meta information and signature are combined for RLP encoding and converted to hex format to get the raw transaction (RawTransaction) that can be sent to the Conflux nodes.

Usually, the wallet and SDK will automatically assemble, sign, and encode the transactions without manual processing.

The raw transaction is sent to the nodes via the full node’s cfx_sendRawTransaction RPC method. The node will first check the transaction. If there is a problem with the constructed transaction, it will fail. Possible failures are:

At this point, the transaction can be retrieved through the RPC method cfx_getTransactionByHash, but since the transaction has yet been packaged, fields related to the block information (blockHash) and the execution result (contractCreated, status, transactionIndex) of the transaction are empty.

Transactions in the transaction pool may have three states.

Transactions in the first two states will be considered as pending in the pool and will not become ready to pack until all the nonces before this transaction nonce have been executed, or until the balance is sufficient.

Transactions that fulfill the packing condition will be packed into blocks by miners in roughly the order of gasPrice, from highest to lowest.

The Conflux network has a block execution delaying mechanism, which means that after a block is packed, it will not be executed immediately, but be delayed by 5 Epochs before it is executed. The essence of block execution is that all transactions in the block are executed.

The transaction information, obtained by the cfx_getTransactionByHash method after the transaction execution, contains the blockHash, status, and other keywords.

At this point, you can also get the receipt of the transaction via the cfx_getTransactionReceipt method.

Confirm the transaction after a certain number of Epochs

That a transaction is executed does not mean that the status of the transaction will not change anymore. Due to the chain structure of blockchain, the blockchain may fork or shift the main chain due to the arrival or creation of new blocks, which may revert certain transactions.

You can use the cfx_epochNumber method and pass the latest_confirmed parameter, to get the latest confirmed EpochNumber

Transaction finalized because of PoS chain

From v1.2.0, Conflux has introduced a PoS finality mechanism to prevent 51% attacks, so that blocks will not be reverted in case of low hashing power.

By introducing a separate PoS chain to finalize the PoW blocks, the state of all the blocks that are voted as finalized will reach finality.

Starting from v1.2.0, a new tag latest_finalized will be introduced. You can use this tag to request the cfx_epochNumber method to get the latest epochNumber that has been finalized.

Why is the transaction failed to send?

If the error message returned is “txpool is full”, you can wait for a moment and try to resend the transaction with a slightly higher gasPrice.

Why has the transaction not been executed on the chain?

You can use the cfx_getAccountPendingTransactions method to get the user’s current Pending transactions and the reason for them.

Can a transaction be canceled or replaced?

If a transaction has not been packed into a block and is in the transaction pool, it can be replaced by sending a new transaction with the same nonce and a higher gasPrice.

Transactions cannot be canceled but can be replaced with a transaction of value 0. This is a way to reach the same result as canceling the transaction.

How to speed up a transaction?

If you want to speed up the execution of a transaction, you can increase the gasPrice of the transaction and resend it.