The story-gameplay (also known as Script-Murder) is becoming popular in recent years. Based on story, the player act as one of the story roles, and interact with others to achieve the ultimate goal from the first perspective. It is characterized by the strong immersion, content-based, social networking attributes, etc.

Our team starts story-gameplay Web2 project from 2017 and became one of the TOP brand in this category. We have accumulated 30 Million Web2 online users, nearly 100 offline studios which can give story-gameplay offline play service to customers in different cities.

The story-gameplay has its own ecosystem roles, including creator, publisher, service provider, player, pirate and Info platform. With the rapid growing, this industry encounters several issues which need to be solved urgently, for example:

These issues limit the development of the whole industry. We believe that the content creators and players need to receive more incentives in the whole economic system as they contribute their innovative ideas and active participation to the whole system. We found that the Web3 and blockchain technology is very suitable to solve the problem and can give an explosive growth for the production of high quality contents through adequate incentive for the creators and players. This is the main motivation of our team to build this project.

Currently, we are developing the first version of UGC Editor which integrates the idea of co-creation tokenomics. It could provide high-quality contents for the story-gameplay platform we built before.

Based on the co-creation tokenomics we designed, the rights&interests and the incentive mechanism of story-gamplay could be clarified. For creators, their income is directly correlated to the story’s popularity. Depending on the content quality, the creator’s income can be increased significantly. For players, they could hold the story proof-of-stake which will make them profitable.

TEAM
12 team members are working full time on this project. Our team is based on Singapore and Shanghai.

CURRENT FUNCTIONALITY
Current story-gamplay systems: for users of our Web2 story-gameplay APP with text-based contents & voice chat, users will act as one of the story roles, interact with other players to collect the scattered information, unlock the hidden clues, make reasoning and reveal the truth. This new gaming form,integrating GAME, IP, SOCIAL NETWORKING, became social king of Gen Z.

With the rapid growing, the current story-gameplay systems encounters several issues which need to be solved urgently, for example:

1)The copyright problems;
2)The story-gameplay price cannot be correlated with actual popularity;
3)The creators only get a small part of the story selling;
4)The players have no way to be profitable.

These issues limit the development of the whole industry.

TECHNICAL PROPOSAL
Here are the function we have already developed in our Story-gameplay Platform:

More details about the proposal of UGC Editor are shown as following:

In UGC Editor Platform, the creators could co-create their contents and release their story NFT, including:

FindTruman Platform Architecture
The whole platform is based on blockchain. Above will be the FindTruman Co-creation Protocol, including NFT Voting Snapshot, staking pools, incentives, etc. The top layer is application layer, includinng the UGC Editor platform and story-gameplay platform. 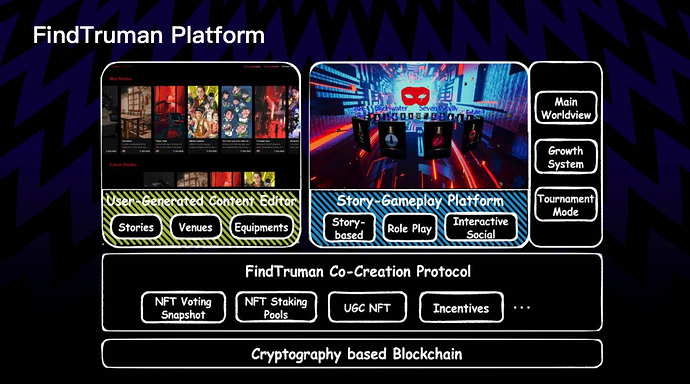 Economic system
Every Story content has its own Pool. This pool contains the $Finds and Story NFT. $Finds is FindTruman’s official token, and the Story NFT is the rights and interests of each story. Every story has its own Story NFT.
With this Pool, we will further improve the Story Game experience by constructing online platform, offline studios to make the Story Game more exciting. The profits generated by Story Game will be shared to the Story NFT holders.

MAINTENANCE CONSIDERATIONS
The development codes, including front-end, back-end, smart contract of the UGC Editor Platform on Conflux will be open source. Moreover, aiming to making Conflux accessible and approachable to more developers around the world, we will open the customized a discussion zone on our community, and communicate and gather suggestions from other global developers, and encourage more developers to participate in the platform co-creation process with FindTruman incentives.

Accomplishments we have achieved
For testing the Web3 users’ interest in this new gaming form, we have developed the several story-gameplays with the combination of the 3D scenes and NFT badge incentives in the past few months.