According to the Conflux v2.0.0 Network Hardfork Upgrade Announcement released by the Conflux Foundation, Conflux network will be upgraded to v2.0 and a PoS system will be introduced. After the upgrade, only stake to the PoS chain will generate rewards, and the original 4% interest for staking will no longer be available.

The PoS system requires CFX holders to stake their CFX to PoS nodes and participate in the PoS voting process, and these CFX holders will receive a certain amount of CFX as a reward.

CFX holders can participate in PoS in two ways:

PHX PoS Pool is a community-owned Conflux PoS mining pool that allows CFX holders to stake their tokens in PoS and receive rewards without running a node, with the following features:

Currently, PHX PoS Pool is deployed on the Conflux Testnet, please use the link to find more: https://pospool.phxverse.com/ 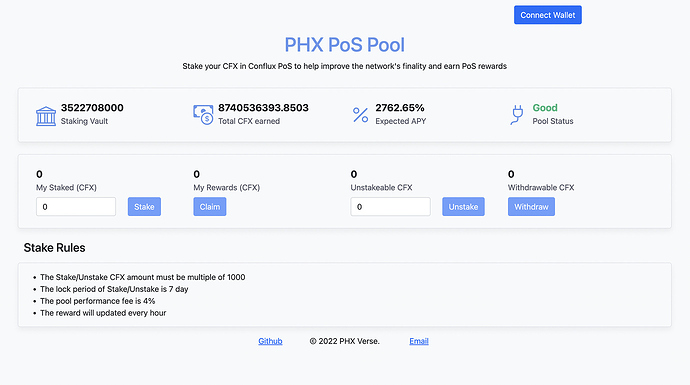 Switch the Conflux wallet to the Testnet and click on “Connect Wallet” in the top right corner. 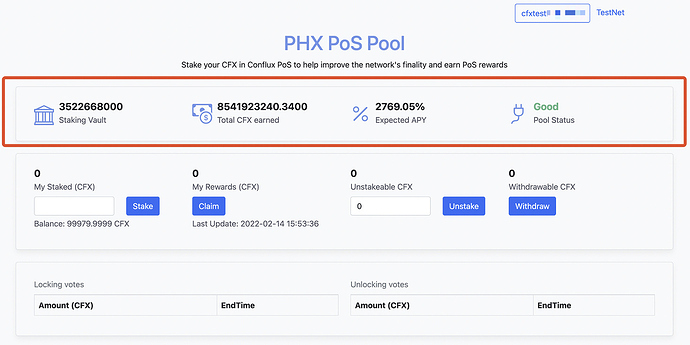 The information in the red box on the page is, from left to right, the number of CFX staked, the total CFX reward earned, the expected APY, and the status of the pool.
Below the red box is the operation area for staking.
Once you have connected your wallet, you can see the balance of your wallet, and then enter the amount you prefer to stake in the input box below My Staked (CFX). (Please note: the staked amount must be multiple of 1000)
Let’s take 1000 as an example:
Once the transaction is confirmed, you will see that you have 1000 CFX in My Staked (CFX) and 1000 CFX in Locking votes.

A detailed explanation of the rules: 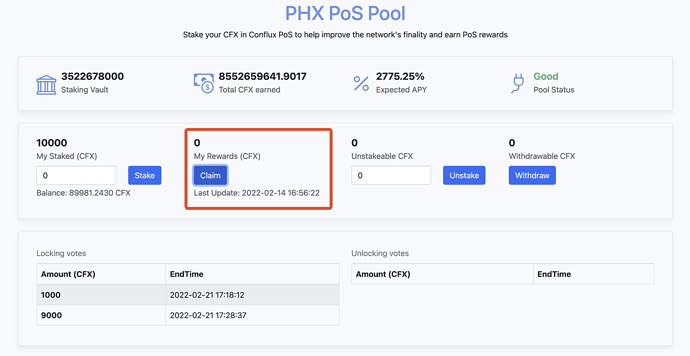 According to the rules of Conflux network, staked CFX on PoS chain is somewhat risky (but we will try to avoid this risk as much as possible).

The following operations may cause your staked tokens to be permanently locked, and the user is responsible for losses caused by these risks.

The following circumstances may prevent you from receiving a reward or reduce your reward during normal pool O&M and network upgrades, including but not limited to:

This post is posted by community volunteers. If you want to directly contact the mining pool developers, please email: [email protected] 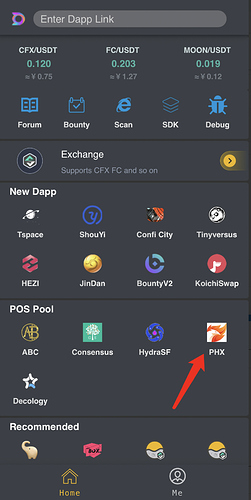 Hi , my computer is shows Loading … PoS Address, can not see the CFX which is in staking, can anyone tell me why, and how to solve the problem? thanks